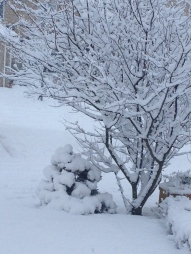 Let me set the scene. Outside the snow is falling, the air is cold and crisp and there is an eerie silence, broken only by the odd passing car or slide of snow coming from the roof. Behind me is the soft hum of the oven which gives way to the heady smell of roasting tomatoes, red onions and bulbs of garlic.

I am at my little kitchen table eating canned soup and a slice of hot buttered toast which, if I am being totally honest could have done with about 30 seconds less than it got in the toaster. Burned rather than completely cremated it has the ability to shatter everywhere with the first to last bite. Quite frankly the shattered mess just adds a crispy topping to the stickiness that is the place mat of the wee boy and missed out on a hasty waft of the dishcloth this morning as we ran out of the door, late for school as always that I have just put my elbow into. But I am not thinking about the mess. I am thinking about sauce.

On my last supermarket shop I was tempted in to buying with a 600g carton of cherry tomatoes, on sale as they were supposedly “past it”. They didn’t look particularly unwell so in the basket they went. However, after a week in the fridge wrapped in plastic they were looking past their salad best which could only mean one thing. Roast. Tomato. Sauce.

This could not be easier. Heat the oven. Throw the tomatoes, olive oil and salt in an oven dish in a single later – given them a roll around to make sure they are well coated. Pop the garlic bulb (still in its paper skin) on the top, shuffle the onion in foil to the side of the tomatoes and put it in the oven for about an hour or until the skins of the tomatoes are starting to go brown and bubbly. 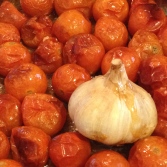 When they are done, carefully remove the bulb of garlic and the foil wrapped onion from the pan. Tip the tomatoes into a food processor. Carefully unwrap the onion from the foil and then peel away the outer skin. 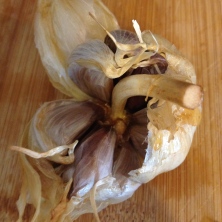 (please be careful as it will be very hot) until the soft middle begins to pop out. Once all the soft flesh is out, add it to the tomatoes. Repeat this process for the garlic, carefully removing the outer paper skin and separating the cloves from the bulb and pressing gently with a flat knife. The soft garlic squirts out like toothpaste and smells divine. Add about half of the garlic* to the tomatoes. Give the tomatoes a good blend until smooth.

This recipe makes about three-quarters of a pint of sauce.

Some ideas for use: pasta, easy tomato soup, pizza topping, add a spoonful to some gravy or as an alternative to ketchup.

*The left over garlic will save for a day or so and is delicious added to gravy or tossed with some melted butter over some fresh pasta.

This site uses Akismet to reduce spam. Learn how your comment data is processed.