David is a girl trapped in a boy’s body. Leo is harbouring a secret. Both are from different lives in the same town. Neither fit in. Over the plastic cafeteria tables at Eden Park School an unlikely friendship occurs, one full of surprises, tears, laughter, heartache and love.

There are many stories and many lovely relationships  within this book but what struck me most was the one between Leo and his dad. Contains spoilers.

Leo and his twin sister never met their father. Their mother barely holds down her job, chain smokes their grocery money and prefers boyfriends and bingo to child raising and bonding. I could see from the outset that Leo had placed his father so high on a pedestal from such a young age on the back of his mothers failings that you can barely find him in the clouds of Leo’s imagination. He doesn’t have a face for a long time into the story. But when that face becomes a reality and the eye 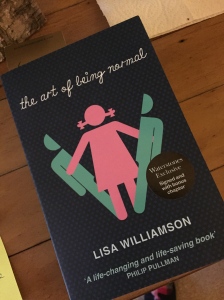 s are set on the  hopes and longings  of a daughter he abandoned before birth you realise that pedestal is nothing but a platform for him to jump even further away. Married with a family of his own, he regards Leo as a nuisance, and a liar and casts him aside once more.

Pedestal smashed, Leo returns home. Who was going to be his hero now? Who was going to fill that void of hope. As it turns out, the one who had been his enemy for so long. The one who knew more about broken hearts that he could ever imagine…

If you only read one book this year, make it The Art of Being Normal…..it had me laughing and crying and despairing at the cruel frailty of life’s emotions. Buy it, borrow it, steal it. Just read it.

This site uses Akismet to reduce spam. Learn how your comment data is processed.